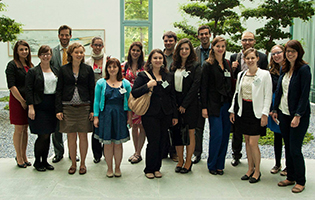 Ana Stojilovska and Magdalena Lembovska attended from 25 till 29 June 2013 the midterm regional seminar in Berlin as part of the TRAIN 2013 program (Think Tanks providing Research and Advice through Interaction and Networking) organized by the German Council on Foreign Relations (DGAP). Analytica is participating in this program with the paper "Security and energy sectors' cooperation with the civil society in Macedonia – friends or foes?" which aims  to assess the cooperativeness of the relevant institutions in the energy and security sector in Macedonia with the civil society following the benchmarks in the Strategy for cooperation of the Government with the civil society.

During the seminar at which 12 researchers from think tanks in Macedonia, Kosovo, Albania, Montenegro, Croatia, Serbia and Bosnia and Herzegovina participated, the first drafts of the papers were presented to receive feedback from colleagues and TRAIN trainers. The focus of this seminar was improving the communication strategies and advocacy skills when presenting a policy papers to stakeholders. The TRAIN participants also had the opportunity to meet German stakeholders as Ms Irene Eidemüller, deputy head of Department at the Federal Chancellery and Mr Dietmar Nietan, member of the German Parliament.

The last part of the seminar was the beginning of the TRAIN Alumni Conference at which the TRAIN 2013 generation had the opportunity to meet the former TRAIN generations. Sonja Zuber as former TRAIN participant attended the alumni conference. Topics of the alumni conference were the effects and consequences of Croatia’s EU accession for the Western Balkan countries; the think tanks’ experience in cooperating with stakeholders at national and EU level; as well as the former TRAIN generations were able to tell what happened with their recommendations from the policy papers prepared within the TRAIN program.

Next is the wrap-up seminar in Brussels which aims to enable the think tank researchers to present their findings to EU stakeholders.